How Delayed Reporting of Workplace Injuries Can Cost You Big

You probably already know that employers can help decrease their workers compensation claim costs by ensuring workplace accidents are reported as quickly as possible, but did you know there should not be guidelines that penalize workers for reporting claims late?

In a study conducted by The Hartford, research demonstrated that delayed reporting increased the average cost of a workers comp claims because the insurer can’t begin to manage claims until an official notice has been given that an injury occurred. 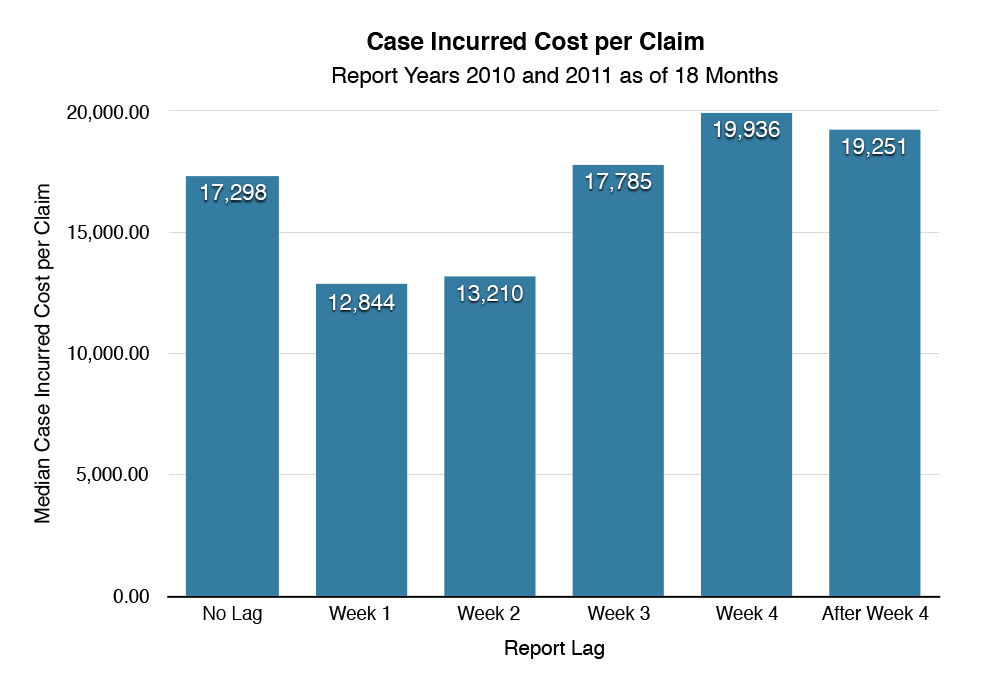 The research also shows that strict reporting deadlines can encourage workers to hide their injuries, allowing an untreated ailment to become worse.  Penalties to employees for late reporting may even encourage them to hire a lawyer to escape repercussions because they postponed reporting of the injury.

“You don’t want injured workers to feel like they somehow have to hide if an injury occurred because they, for some reason, missed this mandatory reporting period,” said Eddy Canavan, vice president of workers compensation practice and compliance at third-party administrator Sedgwick Claims Management Services Inc. in Riverside, California.

The research concluded by the National Council on Compensation Insurance Inc. disclosed that delayed injury reporting can increase workers comp claims costs by up to 51%.

Median costs for occupational injuries were the lowest, $13,120, for claims reported within two weeks.  As claims are reported beyond the fist two weeks, average claim cost grows with each week of delay according to NCCI’s analysis of 2010 and 2011 data, the latest available.

John Robertson, director and senior actuary at NCCI in Boca Raton, stated that lower costs for claims reported within two weeks of an accident likely reflect less severe injuries that don’t heal on their own.  “It might not be immediately obvious that there is an injury that should get medical attention,” Mr. Robertson said.

He also explained that costs may spike a few weeks after an accident because injured workers are more likely to seek attorney assistance with their workers compensation claim then. 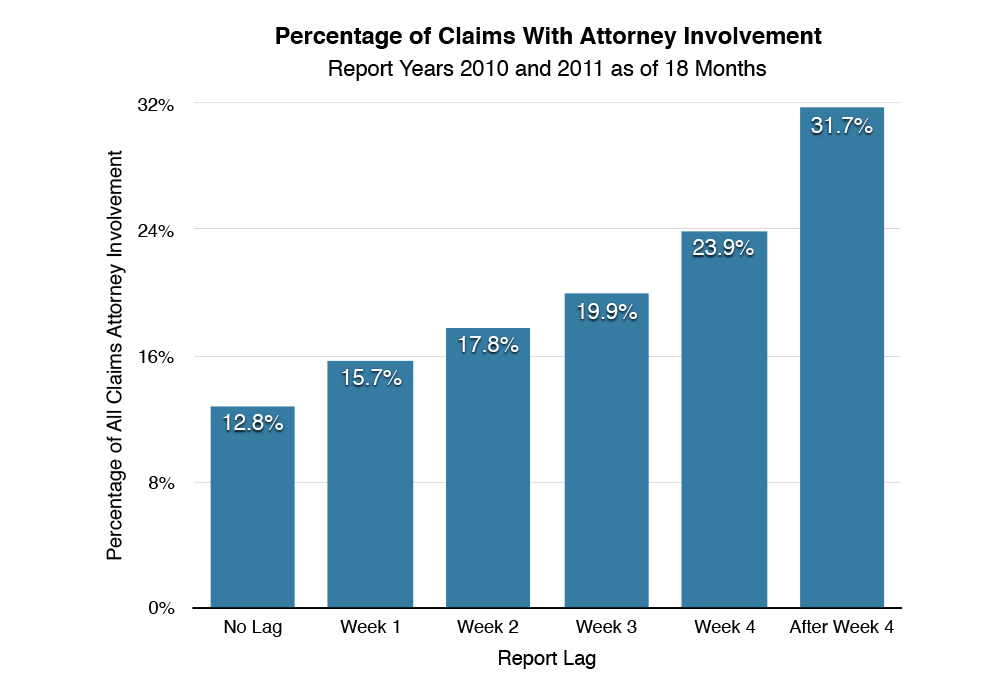 Lawyers were involved in 12.8% of comp claims submitted the day of an accident, increasing to 31.7% for claims made four weeks or later, according to the NCCI data.

Early reporting allows employers to investigate better by collecting evidence and interviewing witnesses soon after it happens, Sedgwick’s Mr. Canavan said. Fast reporting also allows employers to help injured workers understand the process, such as how they will receive medical care and wage replacement payments, and alleviate fears that could lead them to hire an attorney, he said.

“You’re easing their concerns,” Mr. Canavan said. “You’re letting them know that somebody cares about them.”

Employees can wait to report seemingly minor sprains, strains or other injuries in the hope they will heal on their own, said Pamela F. Ferrandino, New York-based national casualty practice leader of placement at Willis North America Inc.

Encouraging employees to report such injuries as soon as possible to their supervisor can keep them from evolving into pricier claims that, for example, could call for surgery in place of physical therapy, she said.

A delay in reporting inhibits the carrier’s ability to get the injured worker on the road to recovery and may allow a seemingly minor injury to fester and become a serious health issue and costly workers’ compensation claim.  Specialists state that reporting injuries within the first day or two after an accident in the workplace is ideal to help keep workers comp expenses down.

While early reporting is one of the easiest and most effective ways to manage workers comp costs, authorities say companies should avoid being disciplinary in their reporting guidelines, which could boomerang if a worker feels they could face consequences for missing the reporting guideline.

Tom Ryan, the workers compensation market research leader of Marsh L.L.C.’s Workers’ Compensation Center of Excellence in New York, stated that employers should reinforce early reporting with staff and examine ways to decrease the lag time for claims that come to light weeks after an accident has occurred.

“If there are cases that do, in fact, go beyond that period of time, address those case by case,” he said.

Mr. Ryan also stated that there are situations where an injured worker reports an accident rather quickly, but the supervisor then waits several days to report the incident if the injury doesn’t seem to be severe or the worker was treated at an in-house occupational health clinic.

Employers should report to their carrier about such incidents in an “incident-only” format, which alerts the carrier to an accident without turning it into a formal workers’ compensation claim. By doing this you will help claims handlers prepare to manage a potential claim, even if an injury is minor. Work First really encourages our clients to report their claims, even as just an incident, because then we have a record in our system and can immediately jump on the management of the claim if it becomes necessary.

Certainly, NCCI’s findings clearly show that when insurers aren’t notified of injuries in a timely manner, the associated claims become complicated and more costly to settle. Influencing your team to get claims reported quickly will lead to lower average claims costs and therefore lower insurance premiums.  This is a simple step that any employer can, and should, implement!